Introductions here is appropriate, no? 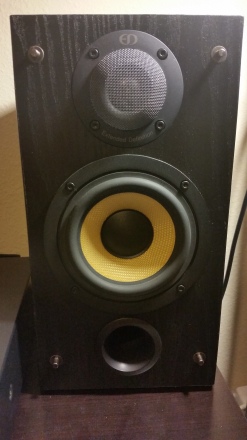 Well, first of all, let me introduce to you the Sony SS-K10ED (see picture). They were first released to the market in Japan March 2007. I know, they are pretty old, and you might even have asked me, why these? Other than the fact that they are part of current set-up, these bookshelf speakers are pretty good, and I’ll shed more light on that later in this write-up of mine which I dare call a review.

The Sony SS-K10ED however, when new was priced at 70,350 yen in Japan, which translates to about $600 US at that time. The SS-K series are one of Sony’s attempt at High Fidelity audio equipment. They have a full-range tower versions of my bookshelf too, which are the SSK-90ED. the ED stands for “Extended Definition”, which I will go into later if you don’t already know.

They were bought used and have some nicks here and there, and one of the pair had the connectors replaced, so this pair has gone through some length before it reached my place. This version of the Sony SSK-10ED is slightly different than those shown on the internet, as the finish is different, and the the prints on the tweeter are different than those I found online.

Really,  the shape is a bit hard to describe, because they are not like your usual bookshelf speakers with a box-like shape. These ones would be more appropriately described as more coned, airplane engine, helmet of a track cyclist, the lamp from Pixar, or the top portion (any better adjective?) of a Bowers & Wilkins current flagship the 800 D3.

Specifications (you can trust me on this) 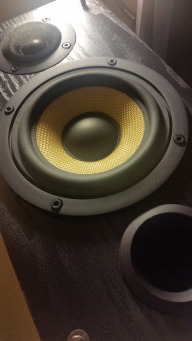 On the specification sheet, it specifies that this speakers have a maximum input power of 120 watts and have a rated impedance of 8Ω, so they don’t require a really powerful amplifier to drive, and shouldn’t be. Regarding the enclosure, they specify that it is a Bass reflex, hence the port. With a pretty average sensitivity of 86 dB, and a quite over the top frequency response of 45-70,000 Hz with a crossover at about 3000 Hz. Outside of the specifications sheets, the build quality is as my dad says, excellent. They are quite heavy for their size, and most likely uses high quality MDF, and knocking on it creates a denser, deeper sound than a lot of other lower-end speakers. Additionally, the (original, at least) connectors are gold plated, and are easy to connect, with either bare wired or other types of connectors I have.

Being able to go to the 70,000 Hz is partly because of the Extended Definition, which is able to produce frequencies that high, hence the name Extended Definition. Since they had gone through such lengths must mean that it was worth it for the sound quality right? Not necessarily, because somewhat like smartphones with the abundance of features and then realizing they were useless over time as you use it, this could be the case. But then again, there are some features you found useful too right? Fyi, we humans can only hear about maximum 20,000 Hz.

Well, they are pretty good (as I mentioned) 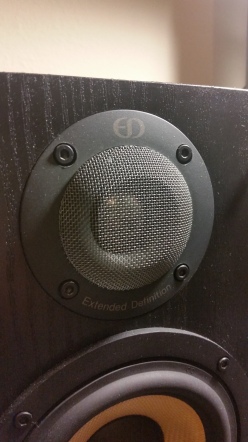 Really, these speakers weren’t mine until about 6 months ago, so I don’t know what they have gone through and if they were used often, etc. so I had a break in period just in case, before any critical listening. My first impression of these speakers were that they looked somewhat like a cheap Panasonic, and that it wouldn’t sound as good as my dad’s NHT T6 towers, or even the Onix (company no longer around) Rocket Tykes I had just right before. But, even in my first impression listening to it, I was impressed.

Imaging was there, the sound-stage was wide and deep, and quite a number of the lower frequency instruments like the Bass guitar could be heard comfortably (at most) with these speakers by themselves. The tweeter was slightly harsher without the grills than with, but the energy and the transitions between the mid to higher frequencies were pretty much non-existent, not like I could distinguish between 2000 Hz and 4000 Hz or something.

After the break-in period… 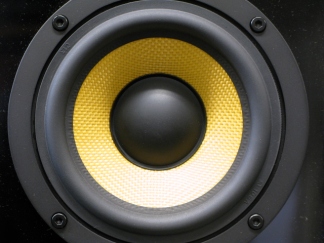 After a break in period of about 1 week, and at least 3 hours of listening a day, they didn’t sound that much different. When I took off the grills, the tweeter was just slightly smoother, and not as harsh as before, but still was harsher without the grills than with it, therefore I would recommend you place the grills on if you listen on these.

I listen to a lot of Kpop, and especially a lot of the new ones, so comparing was mostly done with older ones, and of course other songs I know in other genres too. My taste in music is, I would say, pretty diverse. After listening to a lot of these songs, it is safe to say, these speakers are the bookshelf speakers I fanboy over, if that is a term. That is not to say that I have listened to a lot of bookshelf speakers, but these sound close to my Dad’s NHT T6 towers, which he considers one of the best under $10,000. Best thing about listening to a lot of songs for hours though, is that these speakers don’t fatigue your ears.

To expand on the characteristics of the Sony SS-K10ED, the image is neutral, and the clarity on these speakers are something to behold for a bookshelf. Without a Subwoofer, they can sound slightly too bright for my taste. Plus, you won’t need to toe-them in to experience this imaging and clarity. Then again, I haven’t heard a lot of bookshelf speakers, but these can be comparable to $4,000 towers, so I can’t complain about what I have.

Just to mention their performance with a Subwoofer, which varies with different Subwoofers, they sound like they were made to be paired with my Sub. I love it. The lower frequencies do help done down some of the brightness, and they sound more similar to my Dad’s NHT T6, which says a lot.

These are placed in my room, and are listened to pretty close distance. These are still considered Bookshelf speakers, and not used in studio monitors or near-field speakers for the simple fact that they are not self-powered, and that their purpose is for listening, not mixing or being in a studio. Despite being pretty close to it when listening, I’m in a rather optimum position when I’m listening to them, with their position about 10 o’clock and 2 o’clock from when I sit.

My room’s acoustics, just to mention a bit amplifies the lower frequencies, but in certain parts of the room. Where I listen, not much of the lower frequency is kind of amplified so I just adjust accordingly as I pair these with my Subwoofer.

In other relevant information, I also tried it out in place of my dad’s NHT T6 speakers, and they sound really good, but it really is unfair to compare them at this point, so just know that it reaffirmed my opinion that they can be comparable to the NHT.

These are a pair of speakers I enjoy having. I get the clarity, and the image from a speaker I never expected, and are worth the price for them (new or used). I would recommend these, but they can be hard to find, so I’ll just say, if you can get these for less than $100 these would make a really good pair to have in your home. It’s like paying for a $40,000 car for $5000 or something.

They are really well built, sound really nice, as a good pair for a 2.1 and alone because of the the ability to produce 45 Hz on the spec sheet. Either way, they are a really nice looking speaker to start your audiophile journey to quality audio listening experience. If you can find them. When you can, definitely at least listen to them, and see if you’ll like it or not. Listening tastes vary from person to person, but I definitely do enjoy listening to them daily.

THE NOT SO GOOD

As a Qobuz affiliate, if you are thinking about trying out Qobuz, you can help support me by using the link below! No cost to you, helps me, and benefits you in trying what you want to try!

You have the best Hi-Fi equipment; you deserve the best sound. Experience your music in 24-bit Hi-Res quality with Qobuz streaming and downloads. Get a free trial now.