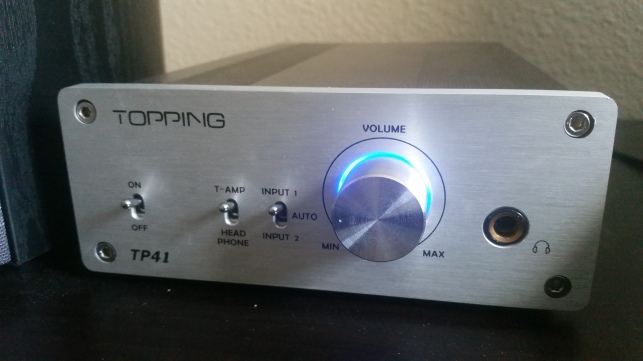 This was the first component in my system. It’s by no means a slouch though. For me right now, it’s the best and only thing I have to amplify the music I have from my HP Laptop. I got it from my dad who wanted a desktop amplifier, but realized the speakers he bought didn’t actually need them (funny, dad). I’d prefer to call it an integrated amplifier because that’s what it is, basically. Size-wise, it’s pretty really small compared to those other components that you would expect from sound system because it’s for a desktop. You don’t really want an amplifier to take up most of the space on a desktop where you are supposed to be working right?

Topping, from what I know, is a Chinese audio company that makes portable headphone amplifiers, desktop amplifiers and DACs (about the size of the desktop amplifiers). They aren’t that well known in the audio world because they aren’t advertised pretty much. For this specific model, the TP-41, which has sadly been discontinued recently, is a Class T amplifier with built-in headphone amplifier 100-110v version that is still being sold new from Amazon for $159.99

The case and the face-plate of the Tp-41 literally felt cool to the touch. The construction was completely metal, which the felt sturdy and strong. As I lifted the TP-41, I realized that it was actually heavier than I thought. It wasn’t such as surprise after I looked at picture of what is supposedly inside of the amplifier. A large toroidal power transformer is the in the back half of the amplifier itself, taking about slightly more than half of the space. The front half is the circuitry and the built-in headphone jack. Usually this big toroidal power transformer is a characteristic of higher-end components, and being present tells quite a number of things about what Topping wanted this Amplifier to be. The connectors at the rear of the amplifier look gold plated and are quality connectors that you would normally find in a higher end component. Because of this, I would think it actually is from the high-end of components just from the connectors and the internal view. Speaking of being cool to the touch, unlike Class A or AB amplifiers, the class T amp runs cool, so the case can be closed and tight, without a need for ventilation, which is also convenient in this case, for being on a desktop.

Size-wise, this is very small for a component, but it is very appropriate for being on a desk, as you really don’t want it to be as big as normal components. They take up about half your desktop space anyway. I find that it is convenient it is shaped this way, as I can place it where I want, and not having it obstruct my study table. The size does present a few compromises from the usual components features, such as more inputs, or sub-out, and is limited to a smaller amplifier power, compared to a normal shelf component.

As it stands right now, I’d say it is in the high-end, for desktop amplifiers anyway. The features in front included the volume knob near the middle, slightly to the right, which has a dotted indent to indicate the volume level. The 1/4″ headphone jack is the right most on the faceplace, with the appropriate marking indicating it. Directly next to the volume knob are two flip switches for the Class T-amplifier and the Headphone amp, and for the 2 inputs which you can switch between. Only for the input switches, there is an in-between switch for an automatic switch between the inputs. When you power it up, there is the sound of a click and there is a light from the gaps of the knob which lights up blue when it is in the input 1 mode. For input 2, the color of the light is green. There isn’t any brightness adjustment for the lights, but it is bright enough for me to see, but it’s too bright that it bothers me either. I find the different colors help indicate and remind you which source you are currently swtiched to. For the Auto input, I find that it takes a few seconds before it switches to the other input when it senses a signal. For the most time, I liked to switch the input manually.

From the first few listening sessions and the later listening session, there wasn’t much different about the sound quality. I didn’t try to listen critically anyway, because I was still breaking in the Sony which I had gotten a week after the TP-41. Except for minor differences, the sound was pretty much the same from day 1.

As I listened to them, my dad, who also reviews speakers and components for an online audiophile magazine commented, that these amplifiers are flat response and are actually pretty good. I liked that it was flat response, which meant that it didn’t “fake” certain frequencies. Although it’s max watt output for 4Ω is 24.3W and 13.6W at 8Ω, it could play most audio recordings at a loud level, quite comfortably. If anything worries me about these amplifiers, it’s the low wattage that it produces, and any possible clipping that could damage my speakers. Luckily they play pretty loud in my small room, and I usually keep the volume in the bottom quarter for most of the time.

When I connected my Arcam DV88 used as a CD player,the low gain still for such components produced such loud sound that it had to half the volume from a quarter to the minimum volume to an eighth from min. volume to play at an audible volume and not inconvenience anyone. Because of this I don’t really need to worry about clipping from these when I play audio to my Sony SS-K10ED bookshelf speakers.

Actual sound quality is not justified by the connector the component uses, or the asthetics, or the large toroid power transformer that I can see in the picture, but by actually trying it out. I can safely say that the TP-41 is a well-rounded integrated amplifier. Unlike some high-end components where a bad audio source is really exposed, the TP-41 doesn’t really nitpick on the audio source quality so much. For the most part audio was 24-bit/192 kHz, but when when I played from a not so good audio source, the sound wasn’t that much different. Vocal music and audio was pretty clear, distinguished and the slightest bit forward. Imaging was actually quite clear, and instrumentation was well separated and sounded quite realistic, for the most part. For example, cymbals don’t really sound very metallic (and thus “real”) and guitar strumming seems a bit too sharp and unnatural. The Sound stage is wide but not so deep as far as I can tell.

Another thing that I like about the Topping is that it has a built-in headphone jack so it can amplify headphones too. In comparison to just listening to my headphones on my phone, these are a definite step up in terms of sound quality on my V-Moda LP, so it is safe to say this desktop amplifier is actually pretty good as both speakers amplifiers and as headphone amplifiers. Bass was tighter and mid-range and high-end sounded smoother than normal. If you want the definition of a killing-two-birds-with-one-stone improvement in sound, this is the way to go.

Despite being a desktop amplifier, this component is a rather efficient and appropriately sized for desktop use, and can power most speakers. The only downside, or rather limitation is the lack of features compared to usual shelf integrated amplifiers, but otherwise I think these are good amplifiers to power bookshelf speakers along with a powered Subwoofer. I’m not well versed in desktop amplifiers, but these sound pretty good compared to my dad’s more serious system, so it’s definitely worth the price for the size and sound quality it produces. Plus, you get a headphone amplifier along with it, which is a one-in-two improvement in sound for your everyday sitting and working, or for me right now, sitting and doing homework, studying or just relaxation in my own room. If you get the chance to audition these and try it out, or buy it, I recommend you do so, because it may be what you are looking for.

As a Qobuz affiliate, if you are thinking about trying out Qobuz, you can help support me by using the link below! No cost to you, helps me, and benefits you in trying what you want to try!

You have the best Hi-Fi equipment; you deserve the best sound. Experience your music in 24-bit Hi-Res quality with Qobuz streaming and downloads. Get a free trial now.